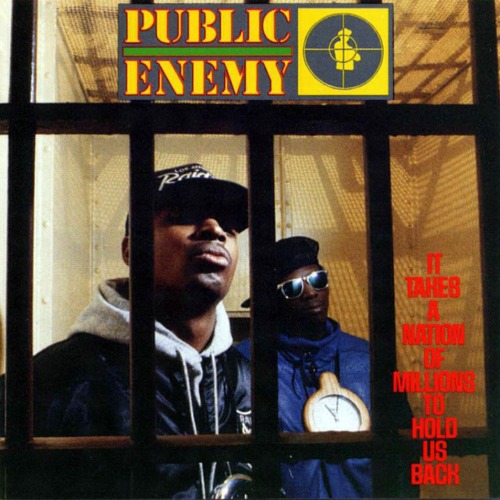 I’ve just finished reading the fantastic 33 1/3 book about Public Enemy’s album “It Takes A Nation of Millions To Hold Us Back“. It’s an essential read about possibly the essential album of the late 80s.

In my personal pantheon of music greats, PE rate highly and this particular album has shared a top spot with maybe Orbital’s second album and something by Stevie Wonder (choice of album differs depending on my mood) for quite some time.

The book takes you through some of the essential background and roots of hip hop in the 80s, but instead of the usual Kool Herc and Grandmaster Flash block party “official history” stuff, the story is told from the unique perspective of Chuck D, Hank Shocklee, Flav, Griff and the rest.

From their roots as Spectrum City sound system DJs and radio show producers, the story is laid down as a group of hip-hop obsessed music lovers trying to make their own mark on a scene that was so fresh, it was re-inventing itself every 3-6 months. You hear about

The writer also draws out the stories from behind PE’s samples: how James Brown’s career turned angry in ’68 in tune with the civil rights movement and the assassination of MLK, how George Clinton and Bootsy Collins were drafted in to dropped the funk, and about how Chuck wanted to reclaim rock as a black thing.

At times a little flowery and verbose with his writing, the author still demonstrates a phenomenal degree of insight and research into an album that, for me, can’t have enough said about it. Like I say, “essential purchase”. Yeaaaah boyeeeeeeee!

Summary: it’s a fine book. You should buy it. Read my full review here.

Full disclosure – I used to work for Giles at Euro RSCG and in quite a short period of time he taught me more or less everything I know about presenting and pitching to clients. As well as some other stuff too.